Kandari Hushiar is a poem by Bengali revolutionary poet Kazi Nazrul Islam, in which the poet asks people to stand up against all odds and speak wittingly about the problems facing the world.

Through this blog, we raise issues which are often ignored, yet they are important for our better understanding of the world and the events happening around us. We discuss topics related to literature, philosophy, politics, anthropology, media, fashion, current affairs and many more. This space is to celebrate our zeal to be vigilant and to create a space where we ‘speak truth to power’.

Adil Hossain is the founder and Anubha Yadav and Avneesh Kumar are the co-founders of this blog. 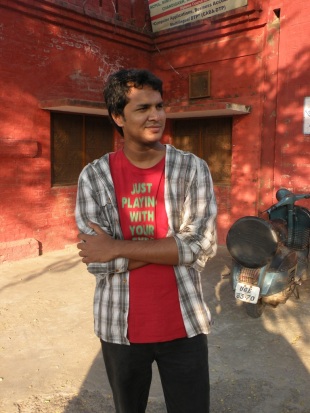 Adil hails from a small village called Chakulia in Uttar Dinajpur district of West Bengal. He completed his BSc (Hons) Geography in 2009 &  Masters in Mass Communication in 2012 from Aligarh Muslim University,India. He was also a Right to Information (RTI) activist back there who unearthed many cases of corruption at personal risk. After his Master degree he worked with an NGO based in Ranchi on the issue of Panchayati Raj system  in the scheduled areas of Jharkhand. With a little bit of luck, he got the Commonwealth Shared Scholarship to study MA Development and Rights at Goldsmiths, University of London in 2012-13. He interned at Media Standard Trust,London. Follow on twitter @adilhossain

Precisely a wonk, Avneesh is a person of varied interests which include international relations, war and conflicts, modern Indian history, politics and sports. Despite being a neophyte, he projects himself as an expert of everything. He also aspires to compete with Google with his knowledge of books.

Anubha was going to become a doctor but then she realized she was a little too dark to be able to wear white and look good in it. She, then, decided to study Journalism at Aligarh Muslim University and later took up a job as a copy editor in an MNC before, quite stupidly, giving it up to embrace a life surrounded by books, interspersed with episodes of movie and music mania. As of now, she works as a freelance journalist to be able to pay for the books she reads. If you like what she writes, do not forget to appreciate it by sending a book to her.